Note: I have tried to condense this article, but some things just have to be mentioned.

There is a place you can enter and no one else dare enter the place with you. In spiritual warfare, this is a place you cannot afford to step away from. It forms an invincible shield around you and the enemy knows that when you’re there, there is nothing he can do about it. You don’t get in to that place because you’re rich, famous or intelligent. It is place you just step into and take cover. It is a secret and invisible bunker.

What is a military bunker? It is a hardened shelter, often buried partly or fully underground, designed to protect the inhabitants from falling bombs or other attacks. Used extensively in World War I, World War II, and the Cold War for weapons facilities, command and control centers, and storage facilities (Wikipedia).

When I used to practice esoteric (occult) acts and you have some dangerous rituals to perform, you have to enter that place. In fact, I used to wonder why we were advised to speak God’s Word so as to get some protection from that place for our own safety. Those who refuse to abide by this safety rule soon pay the price by being killed, turning mad or experiencing some debilitating problem such as blindness or paralysis.

Where is this place? They are located in two places. Within and without your person.

In the Shadow of the Almighty God, there is a shelter with full protection, storage facilities, access to mighty weapons, access to enemy intelligence and also assured rest. I like to call it The Invisible Bunker!

This Shelter (The Invisible Bunker) is an assured place. The fact remains that this invisible bunker is not visible to the naked eye; so when God wanted to convince his saints all the things they gain from staying in His Shadow, He swore! It was that serious. “So when God desired to show more convincingly to the heirs of the promise the unchangeable character of his purpose, he guaranteed it with an oath,” (Heb 6:17)

The beauty of the Invisible Bunker is that you can take it to wherever you go. Amazing! Anywhere you find yourself – in a plane, in the desert, playing sports, in a class, at home, in the office, on the sea, just about anywhere you go.

It is like a massive defensive shield around you. In fact, the Psalmist puts it this way, “As the mountains surround Jerusalem, so the LORD surrounds his people now and forever.” (Ps 125:2 GW) 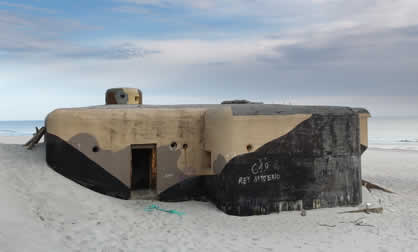 You need to know this and never let the enemy take advantage of you. As a spiritual warrior you should always know that you stand at a vantage point that the enemy can never reach or achieve. In fact, you should rejoice and operate in this truth. It is not debatable.

It irritates and disappoints God when His children don’t know or forget who they really are, don’t know what they have or even hoard what they have and not share to help others. Can you imagine the British Queen’s children walking out of the palace and going on the street and begin for food or clothing? Can you imagine the son of Bill Gates going to local PC shop to beg for a desktop computer? Now imagine the reaction of the parents of these children. The scenario is even worse with God’s ignorant children!

You need to realise and operate from the vantage point God has placed you. Sometimes, people want to see things with their naked eyes before they believe. Well in most cases, God doesn’t always operate that way; in fact, He wants you to operate by believing before seeing or should I say He wants you see through the eyes of your spirit – which operates like your imagination.

Corrie ten Boom recounted an event during the Jeunesse Rebellion in the Congo, when the rebels advanced on a school where two hundred children missionaries lived. “They planned to kill both children and teachers,” she writes. “In the school, they knew of the danger and therefore went to prayer. Their only protection was a fence and a couple of soldiers, while the enemy, who came closer and closer, amounted to several hundreds.”

When the rebels were close by, suddenly something happened: They turned around and ran away! The same thing happened on the second and third day. In an unconnected incident, one of the rebels was wounded and was brought to the missionary hospital. When the doctor was busy dressing his wounds, he asked him: “Why did you not break into the school as you planned?”

“We could not do it,” the rebel soldier answered. “We saw hundreds of soldiers in white uniforms, and we became scared….”

“In Africa,” Corrie narrates, “soldiers never wear white uniforms. So it must have been angels. What a wonderful thing that the Lord can open the eyes of the enemy so that they can see angels!”*

This white-uniform soldiers were there all along, but invisible to the naked eyes. They were the superior force and were present not because of anything or anyone else but God’s children. You may not be aware; these same invisible warriors surround you as well, and they are much more superior to the enemy you face.

When you come in battle with the devil or any of his associates, remember that you’re operating from the Secret Place with an invisible and much more superior army and hence are not alone.”

You would recount a story I mentioned in The Knock Out about a young man who wanted to cast out a demon from it victim and the demon spoke and asked, “Where are you standing?” and the young answered back, “on my feet” and the demon laughed him to scorn; The demon was able to make a mockery because the young man didn’t really know where he was standing.

He was in the secret place, a holy ground, in the Shadow of the Almighty; it was another man who knew that the demon was playing upon the lack of knowledge of the young man that rescued the occasion. You need to know where you operate from, it is the Secret Place – an Invisible Bunker.

The Bunker Within You
More than the external secret place is the internal secret place. Jesus called it a house (Luke 11:24). It is the place where the demons always desire to live. God created this place inside every human being. It has to be occupied by a spiritual power.

A very typical example of this is Samson. “And the LORD’s power began to strengthen him while he was between Zorah and Eshtaol in the Camp of Dan.” (Judges 13:24-25 GNB). The question is where was that Spirit resident?

One time, a demoniac was being held down by several masculine men who seemed to be wearing the men out by his supernatural strength, came face to face with a believer, Joseph Babalola, who knew God. He came close to where these men were struggling to contain the demoniac and asked them to stop.

“Demon, you’ve had enough, leave this man alone and be gone,” the Joseph said.

“No! I’ve been here since he was born and I’m not leaving. This is my house and you can’t drive me away!” The demon inside the man replied.

“Are you sure you have nowhere else to go?” Joseph queried.

“Okay, in that case, I will give you another place to live from today because you must leave this man alone. Come inside me.” Joseph quipped. The demon screamed and ran away into the abyss!

Why could he (demon) not enter the man of God’s spiritual house – inside him? Joseph Babalola knew he had a fiery place inside of him that was burning with a consuming fire. Any stranger that enters into that place is bound to be consumed. Completely decimated! That was where he asked the demon to enter and the demon realized that this was judgement before time and he ran away like a beaten dog with its tail tucked between its legs!

The more of the living Word you get inside you, the stronger you become within, as spiritual reinforcement is built within you every day. The stronger you become, the higher in rank you become in God’s army and the easier the enemy recognises and respects you because he knows each time you attack his kingdom it is usually a devastating event and he suffers so much damage. So, he respects you.

In some cases, you will glow so much that some people housing demonic powers inside them will literally avoid eye contact with you. Some will even be saying obscenities to you for no just cause, usually these are people you have never met before in your life.

This was why Paul admonished, “Let the word of Christ dwell in you richly in all wisdom; teaching and admonishing one another in psalms and hymns and spiritual songs, singing with grace in your hearts to the Lord.” (Col 3:16). This is also what I meant by having fellowship with God and the brethren in The Knock Out.

Mind you, the fact that the enemy respects you does not mean he won’t fight, but he will only choose his battles with you. The forces of darkness are stubborn and never give up easily.

One question still looms in the mind: Why are Christians dying? Why was the devil able to kill many prophets and servants of God? Why do we have so many martyrs? I will treat this topic in detail later, but let me give an insight with some five points:

One major factor is that when God’s saints are about to “sleep”, God will tell them. In most cases, they know that they are about going to be with the Lord in Abraham’s bosom. Paul says, “I find it hard to choose between the two. “I would like to leave this life and be with Christ. That’s by far the better choice. But for your sake it’s better that I remain in this life.” (Php 1:23-24).

I heard of the story of Alexander the Great, who gave away his gold when he went on his conquering expedition. When asked why, he said, “For the hope of greater and better things.” It is the same with God’s saints. We simply give up the mortal for the immortal.

Next time, I will expose the secrets of the devil in spiritual warfare, “The Illuminating Salesman”

Then we’ll see how the hunted can become the hunter: “The Dead Cobra!”

Previous Article
The Knock Out!
Next Article
Spiritual Warfare: The Illuminating Salesman

Plain Lucky or Act of God?