Foxes in The Desert

The Desert Fox (known as Fennec Fox) has large ears and short fur, is a small nocturnal fox found along the northern rim of the Sahara Desert of North Africa and across the Arabian peninsula.

In many cultures, the fox appears in folklore as a symbol of cunning and trickery, or as a familiar animal possessed of magic powers.

Unlike many canids (wolves, jackals and domestic dogs), foxes are not usually pack animals. Typically, they live in small family groups, and are opportunistic feeders that hunt live prey (especially rodents). Using a pouncing technique practised from an early age, they are usually able to kill their prey quickly.

Foxes in the Desert

These foxes, as wild as they seem, can be tamed and even become better pets than dogs. But the truth is that a fox will always be a fox. The Russians, over a 50-year period tamed the silver fox.

In the hand of the devil, they become quite like lambs, they learn the Christian way of life, adopt their values and speak their lingo. Subtle but devastating; this is why Satan loves them.

What does Satan do with them in the Church? They are his prophets. They are liars and speak falsehood. When a group of people are going in the wrong direction or are engaging in wrong activities, they are quick to give false hope. When they see evil, they call it good and claim nothing is wrong with it.

In Ezekiel 13:6-7, they are described as such: They have seen vanity and lying divination, saying, The LORD said: and the LORD has not sent them: and they have made others to hope that they would confirm the word. Have you not seen a vain vision, and have you not spoken a lying divination, whereas you say, The LORD said it; albeit I have not spoken? (American King James Version)

These are they who speak when the Lord has not spoken. This is where they are extremely dangerous. Due to the fact that outwardly, they look just like the sheep, and also behave like one simply because they have been tamed; they are difficult to be spotted, except for the trained eye. Yes, your spiritual eye must be trained with the Word of God to discern them.

Only eyes that have been trained by the Lord Himself can quickly spot them. Just compare the lamb and the fox, the ears are different, the legs – claws instead of hoofs, the noses are dissimilar – pointed with long whiskers instead of blunt.

In essence, they are hungry, ravening, crafty, and guileful. In the deserts – want makes them more eager after their prey. Deserts because there is lack of the Truth; the genuine Word of God does not permeate the atmosphere and these desert foxes thrive in such environments.

These have no connection with heaven, they do not stand against sin, they are given to flattery, they make people feel comfortable in sin and have the false hope that God is too merciful to throw them in Hell though His anger is fierce against them.

The judgement of God is coming and these will not be spared, this is one of the reasons why He said judgement must start from His house. He is angry with foxes in the desert. 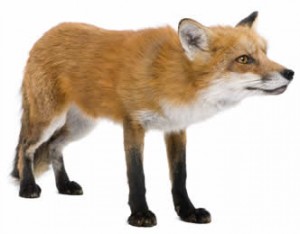 Which are you – genuine prophet of God or a deceiver? Does heaven know you? Do you “encourage” someone living in sin or rebuke them? Do you give false hope to people when they are supposed to fall on their knees and cry out to the Lord for mercy? Are you quick to say “thus says the Lord” in a situation when you have not heard or seen anything? Are you an opportunist – taking advantage of the occasion? In essence, are you foxy?

Previous Article
Plain Lucky or Act of God?
Next Article
Access of Grace Through Faith