Should Christians celebrate valentine?
What are the implications for the Christian who celebrates valentine?

These and numerous questions face Christians in a world that is given to all forms liberal love or should I say lust? So If Christianity is all about love, and so why shouldn’t Valentine’s Day be celebrated?

Like Christmas, Easter, Halloween, New Year’s and other holidays of this world, St. Valentine’s Day is another attempt to “whitewash” perverted customs and observances of pagan gods and idols by “Christianizing” them.

As innocent and harmless as St. Valentine’s Day may appear, its traditions and customs originate from two of the most sexually perverted pagan festivals of ancient history: Lupercalia and the feast day of Juno Februata.

After Constantine had made the Roman church’s brand of Christianity the official religion of the Roman Empire (A.D. 325), church leaders wanted to do away with the pagan festivals of the people. Lupercalia was high on their list. But the Roman citizens thought otherwise.

It was not until A.D. 496 that the church at Rome was able to do anything about Lupercalia. Powerless to get rid of it, Pope Gelasius instead changed it from February 15 to the 14th and called it St. Valentine’s Day. It was named after one of that church’s saints, who, in A.D. 270, was executed by the emperor for his beliefs.

As a child of the God who hates abominable acts, especially of worshipping another god, should you still be interested in Christianized celebration of lust? 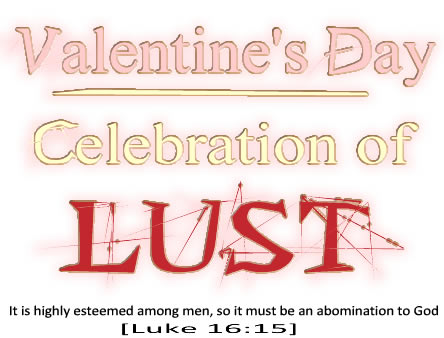 First Man Called Valentine
But who was the original Valentine? What does the name Valentine mean?

Valentine comes from the Latin Valentinus, which derives from valens—“to be strong, powerful, mighty.” The Bible describes a man with a similar title: “And Cush begat Nimrod: he began to be a mighty one in the earth. He was a mighty hunter before the Lord: wherefore it is said, Even as Nimrod the mighty hunter before the Lord” (Gen. 10:8-9). He was said to have hunted with bow and arrow.

It is easy to think that Nimrod was a hunter of animals, far from it. He hunted the souls of men. And they weren’t souls for the LORD GOD. No, he hunted them to destroy them. Nimrod began the very first organized rebellion against God Almighty. And by doing this, he won men’s souls to be used against the LORD. Does that sound a note with cupid, the demon with an arrow that strikes people with lust and lustful intentions?

St. Valentine’s Day originates from the ancient paganism of this Satan-influenced world. It is designed to deceive mankind by appealing to fleshly, carnal desires—or, as the Bible calls them, the works of the flesh. “Now the works of the flesh are manifest [made obvious], which are these; Adultery, fornication, uncleanness, lasciviousness, idolatry…drunkenness, revellings, and such like” (Gal. 5:19-21). Do any of these sound like Lupercalia to you?

Many Christian marriages are broken down today because the couple involved allow cupid to strike their souls and relationship with his arrows/fiery darts! As they partake and celebrate this abomination, the demon of cupid sows evil of lustful emotions into their souls, which will eventually give birth to sin and then all the consequences thereafter. A little leaven does leaven the whole lump!

1. February 14 was an old celebration to Juno Februata, the Roman goddess of intimate passion.

2. It included pairing adolescents by chance drawings for casual sex and going steady.

3. February 15 was the pagan feast of Lupercalia, celebrated in Rome long before Christ.

4. The pagan feast day Lupercalia was a fertility rite and celebration of superstitious Romans.

5. Lupercus, the Roman god after which the holiday is named, was the pagan god of fertility.

6. Cupid, an essential part of Valentine’s Day lore and customs, was the Roman god of love.

8. Saint Valentine, of which there are seven, was only a saint in Rome’s opinion, not God’s.

9. In 494 AD, the Pope whitewashed Juno Februata and Lupercalia as Saint Valentine’s Day.

10. Our Lord commanded us to come out of Roman religion and reject her sins (Rev 18:4).

Valentine’s Day is NOT for a Child of God

12. Christians have no agreement with winged red devils that shoot arrows of lust into hearts.

15. Only lust occurs by fiery darts in the heart; love is the conscious choice to serve another.

16. We wish to make a statement against the fornication and lasciviousness of this generation.

17. Love is of God, while lust is of man; therefore we will only celebrate love Scripturally.

18. We are totally committed against spiritual adultery by worldly associations (James 4:4).

Valentine’s Day is Not of God!

Note: I did not write this article all by myself, it is more of excerpts from a few authors such as
David C. Pack, CK Quarterman et al.

Previous Article
Jonathan & The Pearl
Next Article
The Existence of God – Logically Proven!

How To Overcome Lust!