The Devil goes around terrorising people, stealing their liberties, ruining their peace, killing off their joy and destroying their lives. Why does he do this with huge success? He knows he’s in a war and most people don’t.

Everyone in the world, believer or not are in spiritual warfare. So, this topic affects you in no small way. Awakening as warrior, discovering the resources available at your disposal, realization of the role of God’s invisible higher powers and the ability to harness all forces – visible and invisible to your advantage is essential to a winning strategy.

The devil made a terrible mistake in luring me into the occult at age 13. I quickly knew how to use the powers of water, wind, fire, salt. Does that feel scary that a teenager is involved in the occult?”

He actually thought he had gained another soul for hell fire, but he was very wrong, because by 16, I asked Jesus to be my Saviour and Lord, and He took over my soul because of willful surrender to Him.

“The warrior who is prepared before battle will have the victory over the one who is not.” A reacting warrior will quickly dissipate energy and lack of strength is a huge disadvantage in any battles – physical or spiritual.

The first thing in any warfare is to know yourself; who are you? What do you know about yourself? Are you sure you’re ready for this fight against the spirits of darkness? Are you armed? Your enemy has come to battle with weapons of mass destruction such as HIV, cancer, heart failure, alcoholism, sicknesses and diseases, sinful habits, lusts, selfishness, and such like; what do you bring to the table?

You may have heard before that the best form of defence is attack, what have you got to attack the enemy who has one thing in mind, your destruction!

Goliath can to the armies of Israel well prepared for a battle. He has been doing it since his youth and was well trained in the art of war. No one in the Israeli army was willing to stand up to him because they knew they couldn’t match his prowess. Can you see a parallel between Goliath and Satan? He’s been at it before you were born, highly skilled and has the experience, he’s fought the likes of you before and he’s still around; he’s been at it for thousands of years. He won against Adam and Eve, and has numerous others as victims. So, what have you got?

You must recognise that you as a mere mortal human being is like an ant to this giant of generations! Know yourself! Does this mean there is no way to defeat this destructive foe? Thank God, yes there is! Jesus Christ!

Every encounter he had with Jesus Christ went in abject and total defeat for the devil. He was dominated from the starting bell and defeated every inch of the way to the final knockout punch! The knockout punch was Jesus’ death on the Cross. The devil gave Jesus a below the belt sucker punch and Jesus was heavily knocked down and died. But Jesus saw it coming and knew, as the wisdom of God, the secret of victory (John 12:24); He knew everything about the devil, but more about Himself.

Just as the Devil and his agents were celebrating, Jesus resurrected and delivered a single punch to the devil and that was the end of the devil. Jesus took that sucker punch so as to bring you in; it was that act, which gave you the opportunity to stand and fight against the devil.

When Jesus defeated the devil, He took the ultimate power the enemy had and gave it to someone else – you.

Forasmuch then as the children are partakers of flesh and blood, he also himself likewise took part of the same; that through death he might destroy him that had the power of death, that is, the devil;” (Heb 2:14) 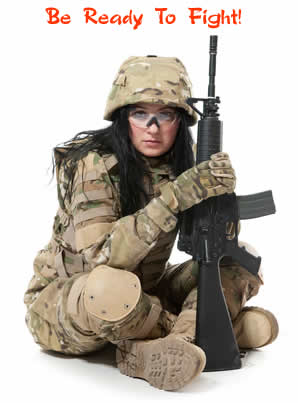 When He rose from the death blow, He became a conqueror. Then when you believe in what Jesus has done for you and accept Him as your Saviour and Lord, His Spirit comes to live inside of you and He then proclaims that YOU are more than a conqueror!

Do you know who you really are now? You’re not that scrawny brainless and powerless tiny speck of dust in the Universe anymore! You’re now more than a conqueror!

When you commit your life and accept Jesus as your Saviour and Lord, submitting yourself to His leadership, He takes you from the pigsty (sin), where ALL of are born and found, cleans all the dirt off and clothes you with His own pure robe of eternal life and pronounce you a king and a priest (similar to being indisputable world heavy weight king). That’s what He makes you – a champion!

As a champion, you must recognise this truth and fight as such. It means you can’t live like others, it means you have to be disciplined, get yourself fit and healthy. All the resources to achieve this have been supplied. Your Bible, prayer and fellowship, both privately with God and openly with others.

In the physical world around us, if you are fighting against another human being such Mike Tyson, you have to first recognise that he’s a powerful puncher, you can’t afford a single mistake with him, if you do, in a split second, its lights out! Game over! But it even gets better when you have Jesus (Proverbs 24:16)

Should you be scared? Of course not! Paul was as human as them and as you, but they knew Paul and Jesus. But these sons of Sceva had no extraordinary identity in the spiritual world; they were still as dirty as pigs in their sins, hence no recognition.

Ask yourself again, “Who am I?” If you have not had a life-changing encounter with Christ, don’t even venture to fight against the demon in your house, but leaving them around means they are your master and you are the slave.”

You want to fight? No, you have to fight!

Who Are You Fighting?

For we are not wrestling with flesh and blood [contending only with physical opponents], but against the despotisms, against the powers, against [the master spirits who are] the world rulers of this present darkness, against the spirit forces of wickedness in the heavenly (supernatural) sphere. (Eph 6:12)

Did you see that? The fight is NOT against human beings! DO you see a murderer or a paedophile? Our fight is not against him or her; it is against the spirits that pushed that person to commit such atrocity.

The master spirits of darkness always seek to influence people (including you) to commit sin, it may start as a small “white lie” to murder. In fact, remember that if you hate your brother, the Word says you’re a murderer already. Whosoever hates his brother is a murderer: and ye know that no murderer hath eternal life abiding in him (1Jn 3:15 KJV 2000).

So, if you’re a murderer you cannot fight against the devil and succeed. That act of hatred disrobes you. It strips away your ability to fight; as much as God loves you, He cannot support you, He would not support a murderer, a sinner. That’s why the Word says, “No murderer has eternal life abiding in him.” That eternal life power is the robe you need to defeat the enemy.

A man was conducting deliverance (exorcism) one day and said, “I command you in the Name of Jesus, come out!”

After the second time of demanding, the demon inhabiting the victim spoke and asked the young man, “On what are you standing to ask me to come out?”

The young man answered, “On my feet.”

The demon laughed and refused to bulge.

Why did this happen? What went wrong? Why would the demon laugh at the man and refuse to bulge? What could the man have done and cry out like the demons in the time of Jesus would scream at His presence?

This and more is presented in my next article, next week; come back for the part two of Spiritual Warfare: The Invisible Bunker.

Teaser: Creating a defensive stance will shield you from defeat, but making an offensive position will give you ultimate victory.