Christ-in-you means the experiencing of die-to-self. Dying out to the self-life is a message that most within the Christian community do not desire to hear. Therefore, a time of tribulation is increasing upon the earth to bring forth a time of purification within those who would finally yield to God. This purification also includes a separating from the theological lies that have increased carnality on every side among the people. While God purposed the church order to become a place of refuge from wrath, the lies told and received by the many become but strange delusions without refuge.

In these delusions, the people choose to believe the lies because they find it hard to believe the truth. 2 Thess. 2:11-12, “And for this cause God shall send them strong delusion, that they should believe a lie; that they all might be condemned who believe not the truth, but had pleasure in unrighteousness.” The word “send” in verse eleven is the Greek word “PEMPO” which means “to send (especially with an escort), the sender accompanying those sent.” In this, the sender is God who accompanies His word concerning the strong delusions that dwell in the people’s hearts; in their state of rebellion, they remain full of lies. Why? 2 Thess. 2:10, “And with all deceivableness of unrighteousness in them that parish; because they received not the love of the truth, that they might be saved.”

These lies of the enemy having found a home in the carnality of the church enables Satan to find himself a home in the church because and through this carnality. A church yielding to the influences of the self-life, as Eve did in rejecting God’s word and position to become a god unto self as she rejects the creator God who loves her. Satan, in erecting his synagogues of death has but one desire, which is to establish himself as ruler over humanity. Satan’s lies, accepted by the carnal Christian community, are mainly for this purpose, to destroy God’s elect, God’s truth in His man-child.

John 16:2, “They shall put you out of the synagogues; yea, the time cometh, that whosoever killeth you will think that he does God service.” While Satan has no real power over the church or the elect, his purpose is to get Christians to do his bidding by robbing them of their spiritual authority. His bidding is to attack the birthed man-child, who, elected by God to crush the head of the serpent, while Satan’s influence attacks them in the name of the Lord. Rev. 12:17, “And the dragon [serpent] was wroth with the women [church], and went to make war with the remnant [first-fruits, man-child] of her seed, which keep the commandments of God, and have the testimony of Jesus Christ.”

How does the church war against God’s remnant? The church, in receiving the lies of Satan that feeds the carnal mind is becoming a mind-set that is maturing within the church. This carnal church makes room for a mind-set in what scripture calls “the harlot.” A harlot is one who submits herself to spiritual fornication and adultery. How? Fornication and adultery comes by receiving into their church order all manner of carnal doctrines, rituals, ceremonies, and philosophies that promote self without any need for the cross of Christ.

The rejection and absence of this sacrificial cross and its sanctifying work opens the door for perilous times. 2 Tim. 4:3-4, “For the time will come when they will not endure sound doctrine; but after their own lusts shall they heap to themselves teachers, having itching ears; and they shall turn away their ears from the truth, and shall be turned unto fables.” In considering the meaning to the words “not endure”, notice the impact of their meaning. These words express “independent and absolute; not depending on any condition expressed (the condition of endurance) or implied.” Thus, a people not willing to stand upon that which God has established.

The beast spoken of in Revelation, the one arising from the sea (the heart of the carnal church) will persuade and encourage the heads of the carnal church systems to blaspheme the elect man-child company as they stand against Satan’s lies with God’s truth. The Christian community, for the most part, has become the harlot where the beast dwells. It influences the harlot to attack the present-day sons who have become God’s truth. With many carnal Christians within the church systems, God separates the man-child from that church to bring judgment to those synagogues of Satan, the carnal church.

In God’s judgment through the sons, the carnal church rises up to war, to attack the truth of God’s word as it dwells in the elect of God. This attack comes through their carnal doctrines and religious activity that includes fleshly entertainment, which feeds only the flesh of men. Matt. 24:11, “And many false prophets shall rise, and shall deceive many.” Mark 13:12-13, “Now the brother shall betray the brother to death, and the father the son; and children shall rise up against their parents, and shall cause them to be put to death. And you shall be hated of all men for my names sake; but he that shall endure unto the end, the same shall be saved.”

With God’s last-day man-child company removed out from the church full of carnality through a spiritual birthing, the carnal mind is at work to entice this carnal church to stand against the truth of God as it manifests through God’s sons. These separated first fruits, now in the power of God’s glory, bring judgment against this harlot church.

Just how has she become a harlot except they love pleasures more than being lovers of God? 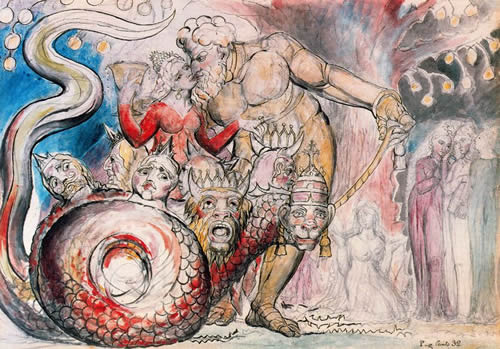 The Harlot and The Giant

Herein, the carnal mind, desirous to be religious and self righteous, opens itself to receive damnable doctrines as they fight against God’s truth.

The truth of God is that which is now being manifest through these first fruits as they reveal Christ in the earth. Isa. 9:15-16, “The ancient and honorable, he is the head, and the prophet that teaches lies, he is the tail. For the leaders of this people cause them to err, and they that are led of them are destroyed.” The tail, these false prophets shroud their lies with feel-good messages that deny the need for the sanctifying work of the cross. They promote a doctrine that exalts self through a gospel of half-truths. They yield to a purpose driven doctrine that separates the people into a scheme of promoting self instead of dying to the self-man. In all this, they are becoming their own god while manifesting the harlot system that shall meet its doom.

Judgment comes to this harlot church as she takes her power from the people and organizations that support carnal worldly worship. Any who are participating with the spiritual adultery of this harlot will be the object of God’s judgment. The words “many waters” are a symbol and point to peoples, and multitudes, nations, and tongues (read Rev. 17:15).

Jeremiah 51:13 also reveals this judgment, “O thou that dwells upon many waters, abundant in treasures, thine end is come, and the measure of thy covetousness [worldliness].” Isa. 17:11-12, “In the day you will make your plant to grow, and in the morning you will make your seed to flourish; but the harvest will be a heap of ruins in the day of grief and desperate sorrow. Woe to the multitude of many people who make a noise like the roar of the seas [the sounding out from the heart of carnality], and to the rushing of nations that make a rushing like the rushing of mighty waters [many people declaring one perverted doctrine].”

The harlot, also known as Babylon, is revealed as the spiritual places where the carnal Christian gathers, speaking of those who reject the life of Christ. Instead of having the Spirit of Christ in their gatherings they become the dwelling place of spiritual corruption. Rev. 18:2, “And he cried mightily with a strong voice, saying, Babylon the great is fallen, is fallen, and is become the habitation of devils, and the hold of every foul spirit, and a cage of every unclean and hateful bird.”

While judgment comes to Babylon, the elect appear in the full measure of the Christ. These glorified people manifest the Christ nature and bring judgment because of whom and what they are. In this time of God’s wrath, God’s purpose is to extract all that is good from the Babylon system, all those who will finally come to Christ. Judgment will set those in Babylon free from carnal bondage, as and if they humble themselves before God to receive Him.

For this cause, the harlot church is to be exposed, revealing its true nature and enabling those who are in religious bondage to know freedom in Christ as they choose to come out to know the true Christ. In this, the appearing of Christ is coming forth quickly as He manifests Himself through His elect, His saints. To this, we say come quickly Lord Jesus in the day of your appearing.

“The Harlot – Revealed” by Duane Stewart
“A Voice for the Gathering Saints”
www.avoiceforthegatheringsaints.org

Previous Article
144,000 – God’s Elite on Earth?
Next Article
The Pattern, The Letter and The Veil